I made it! After staying up till 4am packing and cleaning, catching a cab to the airport at 5, having a 5 hour layover in Detroit, a 13 hour trans-Pacific flight – wait, make that 16 or 17 hour flight due to a sandstorm and subsequent diversion/refuelling stop in Nagoya – and a run-on blog intro later, I am safely in Japan.

I was met at Narita airport by my friend T. and his parents. They proceeded to be the most gracious hosts one could imagine (starting with waiting for me despite the lengthy delay). They took me out for dinner, where I started my quest to relearn how to use chopsticks. I swear that by the end of my 12 days in Japan and Korea, I will have mastered them. In the meanwhile, I am (mostly) refusing the kind offers of western cutlery.

We headed to their home in rural Japan, somewhat near the city of Chiba. It is a lovely traditional home, complete with sliding paper doors between the rooms. I slept on a traditional Japanese bed, which is a futon mattress on the tatami mats laid on the floor, under several duvets, and is amazingly comfortable. And then I woke up at 6am. Curse you, jet lag!

Oh well, an early rising meant, if not an early start in to Tokyo, at least a chance to hop on my friend’s computer and feel connected with home. It was a very strange feeling to arrive in Japan and see “no service” on my phone, even though everything I’ve read indicates that I should be able to get (very expensive) calls. I haven’t generally suffered from homesickness early in a trip, even when I’m an ocean away, but I have to say I felt it when I had no wifi to use my phone for internet and no service to use my phone at all. It’s amazing how much more plugged in we all are than even a few years ago. No doubt the lack of Internet will be a good thing for me in the long run…after I get over withdrawal.

Once we  were in Tokyo, we headed to a neighborhood called Asakusa, where we walked to the Sensoji Temple. In front of many of the temples, there is something that looks almost like a well where burning sticks make smoke that you wave over yourself to purify yourself. I purified myself and decided to see my fortune, which I did to the left of the temple. You shake a box full of sticks, pull one out, and see what number you chose. It was my lucky day. Apparently I got the “best fortune”, which is auspicious for pretty much everything, including traveling. Off to a good start!

View of gate leading up to the temple

Me in front of the gate 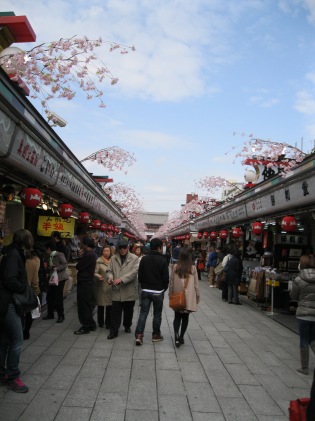 Market between the gate and the Sensoji Temple 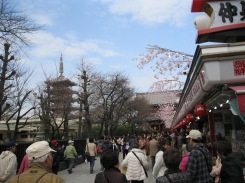 View down side street on our way to the temple 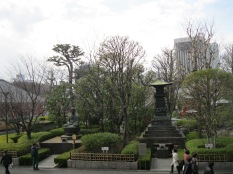 View of the garden on the side

Another angle of the temple complex

Dessert (red bean paste and some cooked grain) along with green tea at a well known dessert place near the temple.

One of the two trees at an entrance to Ueno Park that actually had cherry blossoms already!

And against the pretty blue sky…

View of the National Museum from its garden

Even the manhole covers in Ueno have cherry blossoms!

3 comments on “Early Days or What Did I Hit to Switch My Keyboard to Japanese Characters?!”