After a delicious breakfast on the rooftop terrace of my hotel (spent gazing at the Blue Mosque, with Hagia Sophia and the Sea of Marmara behind me), my new Canadian friend from the previous night and I headed over to Hagia Sophia.

Hagia Sophia started its life as a church in the sixth century AD, and became a mosque 900 years later. Its dome was the biggest until the Renaissance Duomo of Florence. And it’s very impressive:

The interior (now a museum) is filled with a mix of decorations from the 6th century to much later when it became a mosque. Among them are some incredible mosaics, several in gold: 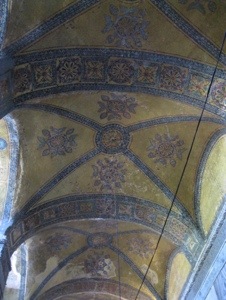 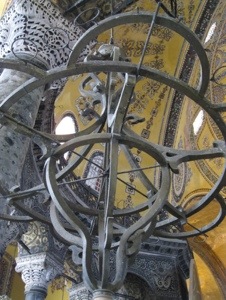 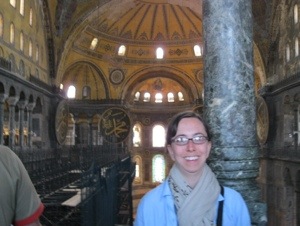 My plan for the afternoon was to go to the Blue Mosque, but as I arrived at Sultanahmet Square (between Hagia Sophia and the Blue Mosque), I heard the call to prayer. I decided to sit on a bench in the square and wait, which was a great decision as it turned out. There are three mosques around the square, and I sat in a wall of sound as the three muezzin tried to outcompete each other. It was an incredible experience! I’m pretty sure at one point one of them turned up his loudspeaker.

Once prayers were over, I had a chance to enter the gorgeous Blue Mosque, so called because of the glorious tiles on the inside. I thought it lovely, but a pity that there were so many tourists (and yes I do recognize the irony there). Whenever I enter a house of worship, I try to find a quiet corner to meditate or pray, and it just didn’t seem possible there.

But do feel free to drool over the glorious tiles! 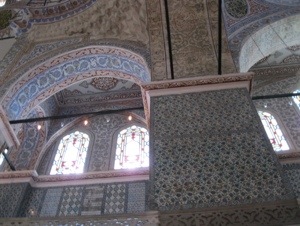 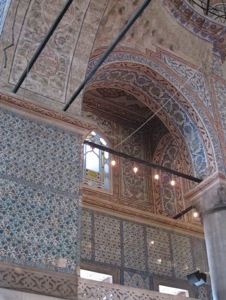 I had bought a three day museum pass so decided to get out of the sun by going to the Archeological Museum. One of the most spectacular items they have is the Alexander sarcophagus, which depicts, but did not enclose, Alexander the Great. The artistry is amazing and some traces of the paint still remain. They also have a chain that was used to close off the Bosphorus (picture at the bottom of the post).

As part of that museum complex, there is a little tile museum that is both a beautiful building and a lovely collection: 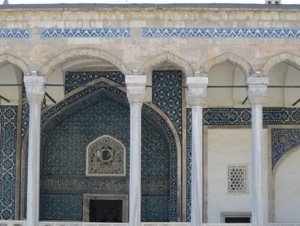 Below: some flowers in the way out of the museum

My busy day wasn’t over yet – I met up with my new Canadian friend and had dinner with her and her friends (who had arrived) across the Golden Horn near Taksim Square. We walked most of it, so I got to see Galata Bridge close to sunset.