My kind host at the guesthouse (to which I had moved the day before) heard that I had nebulous plans for the day of finding a phrase book and guidebook and then playing it by ear. First he gave me some books from his book exchange even though I don’t have books to leave – I’m all set for Lonely Planet guidebooks now, which is a relief to my wallet! (English language books abroad are always so expensive – as long as “abroad” is not England or some such country, of course!) Then he suggested an itinerary for the day which consisted of the Mosque of Suleyman the Magnificent, the Egyptian (or Spice) Bazaar, and a not-so-touristy small mosque called Rustem Pasha Mosque known for its Iznik tiles (similar to those in the Blue Mosque). Huzzah for more tiles and fewer tourists! (Come to think of it, that should be a blog post title.) He even recommended a good cheap eatery, a relief after the prices in Sultanahmet.

I started by going into an English language bookstore on Divan Yolu (the heart of the tourist area) to pick up a phrase book. Everyone seems to speak English in touristy Istanbul, but I wasn’t sure this would be the case throughout the rest of the country, even though I’m going to pretty big tourist destinations. I felt a desperate lack of a phrase book in Russia and was not about to repeat the mistake. (As I write this almost a week later, I most regret not getting a dictionary as well – but really most people so far have spoken great or at least adequate English.)

I then wandered down towards the Spice Bazaar. I had a long day to kill as I had gotten my overnight bus tickets to Canakkale for a midnight bus. I enjoyed my brief walk-through, but stayed resolute: no shopping in Istanbul until my return, so I don’t have to carry this stuff everywhere. (I did leave a small bag at the hotel, but didn’t want it make it bigger…or blow my entire budget with a couple of weeks of travel left.)

I had a vague idea of where the mosque was so decided to go in the general direction. Getting a little lost lets you see beneath some of the layers of a city at times. I walked uphill towards the mosque through a street of toy shops; it seems that the areas around the bazaars are themed as if in continuation of the bazaar. Eventually I met up again with the flow of tourists and wended my way to the summit.

Of course it was a scorcher of a day, and I had arrived right around one of the prayer times, but I found a shady part of the courtyard and waited. The architecture is splendid, the interior much simpler than Hagia Sophia or the Blue Mosque.

Start of Divan Yolu: mile marker to cities in the Roman Empire: 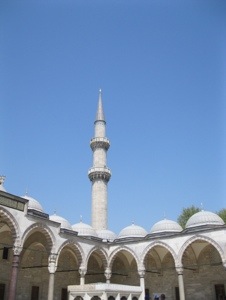 View of the Golden Horn (or Bosphorus – it’s easy to confuse them and the Sea of Marmara): 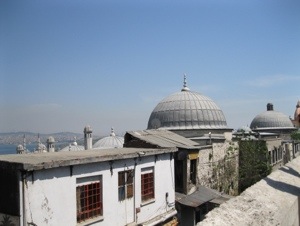 The mosque on leaving: 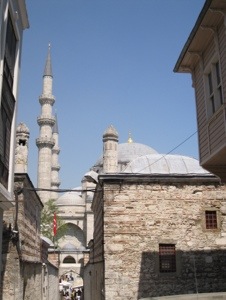 I decided to head downhill towards the University of Istanbul upon leaving the mosque. But first, ice cream! It was a perfect day for ice cream, like a summer day out of childhood with a strong sun, and it was definitely time to rehydrate, too. I stopped at a little store that had prices posted (easier to figure out what to pay since I haven’t learned much Turkish yet) and bought one of those wrapped vanilla and chocolate cones that remind me of my childhood family outings to French or Swiss parks. For some reason, the man behind the counter then gave me a second cone as a gift! I’ve not got the foggiest clue why, but this kind gesture made me smile (and gave me lunch).

Enjoying my ice cream, I passed by the large gates to the University and with sticky fingers entered the booksellers market. (All looking, no touching. I know better than to smear chocolate on a book.)

This route, while enjoyable and extra ice cream filled, brought me out of the way from where I wanted to go, so I more or less completed a circle to get to the next mosque. Boy was it worth it! A little away from the beaten track, it actually feels like a house of worship, and it has breathtaking tiles. (I know I keep using adjectives like breathtaking and gorgeous, but I think they are deserved at all these sites.) 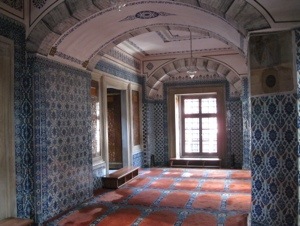 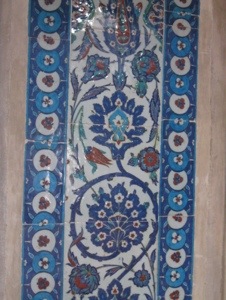 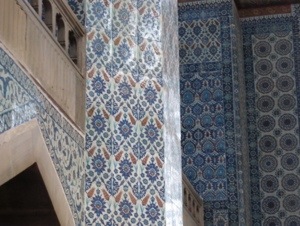 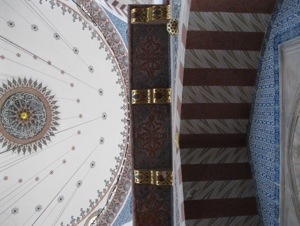 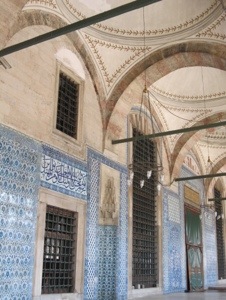 I then headed back for a rest on the terrace of the guesthouse, before returning to the Spice Bazaar area for dinner at the decent self-service place that had been recommended. I finished dinner with some Turkish coffee. Tasty, but most of the grounds settled to the bottom despite my swirling. I’ll have to try again!

Heading back to the hotel with some time left to kill, I stopped back at the bookstore to buy Orhan Pamuk’s memoir about growing up in Istanbul. I headed over to the Hippodrome to read quietly for a bit. However, I ran into a big group of motorcycle cops doing exercises of some sort – maybe a graduating class? I watched them for a bit, read my book, then got ready for my night bus adventure. 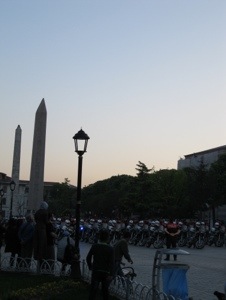