Last Monday, I went to CUI for the oral placement test. That was fun – not! It was a bit of an embarrassing exercise in futility – I’ve never studied Spanish before, so I figured that even with my knowledge of other Romance languages, I was going to be in level 1. And I was, but only after a few excruciatingly embarrassing moments similar to a nightmare where you’re up on a stage giving a presentation in front of a lot of people and you can’t say a word. Except it was real. (No stage, though!)

Tuesday was the first day of Spanish classes. I met some nice people, most of whom are college exchange/study abroad students. I really enjoyed spending time with language learning again. It’s been years since I’ve used that part of my brain! Tiring but worth it. Oh yes, and the guy came to fix the water heater. Did I not mention that? My gas water heater’s pilot light had kept going off at inopportune moments ever since I moved in to my apartment on Saturday. Luckily it was fixed on Tuesday so I was set the rest of the time I was in that apartment, but it made for an…interesting time taking showers and not knowing whether I’d have any hot water.

On the Wednesday, a couple of the girls in my class and I went to the Museo de Arte Latinoamericano de Buenos Aires, otherwise known as MALBA. It’s in a lovely, shiny modern building. Wednesdays are free admission for students and half off general admission, so there was quite a line. It moved pretty quickly though, so we got in in about half an hour (after some great people watching). Most of the museum was dedicated to a special exhibit by a Japanese artist who was very active in the sixties and seventies. She seemed to use polka dots a lot, and the museum had this fantastic interactive exhibit where they gave everyone a sheet of variously-sized colored circle stickers to put on themselves and on the walls and furnishings of a special room. Apart from the permanent collection of Latin-American art (two rooms, including a Frida Kahlo self-portrait), the sticker room was my favorite.

Outside MALBA
And then travelers’ tummy troubles hit and I decided to keep a low profile. Fact of life when traveling outside of developed countries – enough said. I did manage to move from my apartment in the older building in Palermo Soho back to the cozy little studio I had spent a few days in when I first arrived, in Palermo Hollywood.

I was feeling well enough by Sunday to meet some folks from my class and go to the San Telmo market (Feria de San Telmo). It’s blocks upon blocks of stalls ranging from tango-inspired art to matés to cheap touristy knick-knacks to slices of cake. We decided to share a couple of yummy slices of cake in the middle of the crowded, narrow street, then stepped into a side courtyard to listen to some musicians. A few blocks further, we detoured into a covered antiques market. It was a chilly day and we got to Plaza Dorrego, the heart of the quintessential San Telmo antiques market, right when they were packing up, so we warmed up in a coffee shop and headed home. On the Subte home, an older American gentleman heard us speaking English (the lingua franca among two Americans and two Norwegians) and started chatting with us. 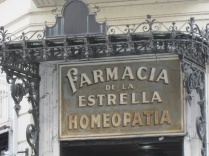 Pharmacy seen while walking to the San Telmo market 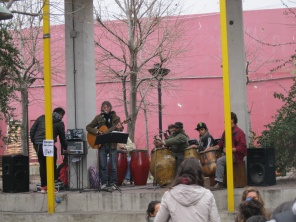 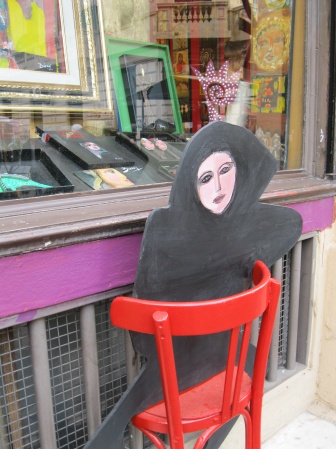 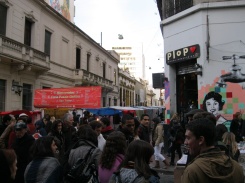 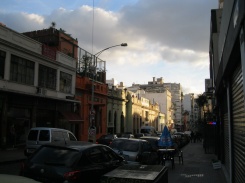 San Telmo side street
It was fortunate that we took advantage of Sunday to go outside, because much of this past week has been either cold or rainy or both. I did manage to go to another fantastic and affordable parilla with Melissa on her last night here, after some enjoyable window shopping (including seeing a child-sized maté in a toy store). 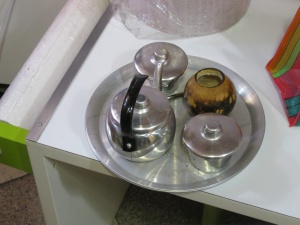 Even toy stores have mate!

Somehow we always get picture of food:

I did also go to an international conversation night called Mundo Lingo. While it took a lot to get me out of my cozy apartment and into the dark and cold, I ended up having a good time and staying for over three hours nursing my fernet and coca cola. I spoke with a bunch of porteños, primarily in English but with a few sentences in Spanish (maybe more next week), with a Frenchwoman in French, and with a bunch of other interesting people. I got a great tip on a place to go for tango lessons/to observe a milonga, which I think I will check out this week. In the meanwhile, on Friday I bought a pair of jazz shoes so I have something to dance in (that won’t have me twisting my ankle – tango shoes are lovely but generally very high heels). It turns out that my new shoes were made in the little store I was in, and they are leather. Nice little souvenir!