Wow, I’m a bit behind in the writing department. Sorry! Must be all that wine tasting in Mendoza…just kidding, really it’s that I’ve taken too many pictures to upload in a reasonable amount of time. But who said anything about reasonable anyway?

So, back to my final post, final part about my stay in BA (final at least till I return in a few weeks). I was trying hard to see the things I thought I’d really regret having left without seeing. This included the Bicentennial Museum, Puerto Madero, and a quick photo op with Mafalda. (Who’s Mafalda, you ask? All will be revealed in due time, never fear!)

First, the Bicentennial Museum. Built underground in a complex that incorporates the remains of the old customs house, it chronicles Argentine history from settlement and independence to the current government. And opened by the current Peronist government, it’s fair to say it has a decided bias. I had been warned about the bias, but even my limited Spanish gets language that associates the economic policies of the pre- Kirchner governments with the preceding military dictatorship! But overall I still learned a lot about the sequence of events that molded the country. I do have to admit, however, that one of the highlights (other than seeing a beautiful old desk that I love, its having belonged to Sarmiento being somewhat incidental to its sheer beauty), were a set of political dolls in the gift shop. I had heard that there was one of Kirchner as well as one of her husband, and the latter had angel wings to show that he is no longer living…

Bicentennial Museum on the remains of the old customs house 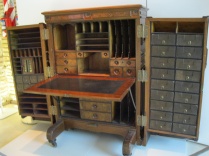 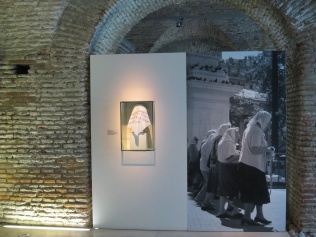 Dolls of Argentine political figures – some with angels’ wings!
I walked to the canal from the museum, entering the barrio of Puerto Madero. It was a short-lived port a long time ago, having been outgrown pretty much as soon as it was developed, so for a time it was full of abandoned old warehouses. Then someone had the bright idea to covert the old warehouses into apartments and restaurants, build some new high rises, and make sure that the yacht club was located there – instant gentrification! Now it’s quite a ritzy (and touristy) area, though the ecological reserve there is apparently enjoyed by many porteños. I didn’t go there since I wasn’t in the mood for a park so soon after the Jardín Japonés. Instead, I enjoyed walking around the water, checking out an old Argentine naval sailing ship turned into a museum. 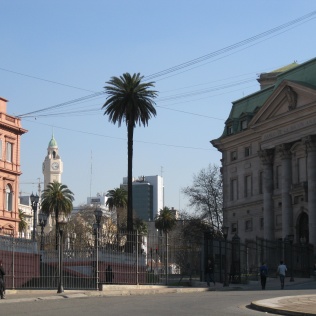 A first view of Puerto Madero and the Women’s Bridge 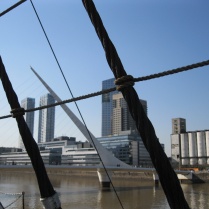 A view through some rigging

The training boat viewed from the bridge 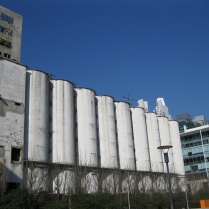 One of the remaining old warehouses

Looking back at Puerto Madero

Spaceship or flower? You decide!
I wrapped up the day with a quick stop in San Telmo.

A lovely church in San Telmo

I wanted a picture of me with Mafalda, a little cartoon girl by a celebrated Argentine cartoonist. The picture someone kindly took of me turned out terribly and is consigned to digital deletion, but I snuck in another shot of Mafalda herself so not all was lost!