The day after my trip to Valparaiso, I decided that I should figure out my options for heading back to Argentina. I planned to check out the Jesuit estancias near the Sierras, centering around the city of Cordoba. Since snow had closed the Andean pass I had taken from Mendoza to Santiago, I needed to take a flight back to Buenos Aires, and the cheapest option was around 7am the next day. Ugh.

After taking care of my itinerary, I decided to see the last sights I really wanted to see…within reason, as it was cold and pouring rain all day. First I headed to the Barrio Paris-Londres and a church called San Francisco. I’ve read that it’s the oldest colonial building in Santiago.

Atmospheric streets in the Barrio Paris-Londres 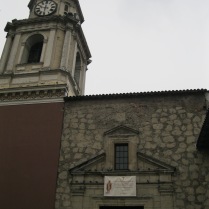 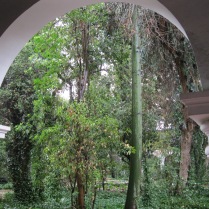 Greenery in the courtyard by Iglesia San Francisco 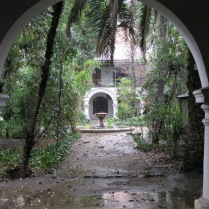 And another view of the courtyard by San Francisco Church 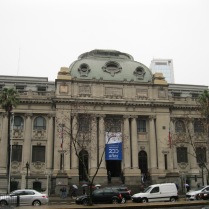 The National Library, Santiago, Chile
Sadly, they were holding mass so I was only able to see the outside of the church. However, I did visit the Colonial Museum nextdoor in the adjacent buildings. The courtyard is quite beautiful. The museum mostly houses religious relics, so I was a little disappointed as I had hoped to see exhibits about daily life, but I did appreciate the architecture.

Walking around the Barrio Paris-Londres (two streets for which the barrio is named) was also enjoyable, as it seems to channel a Parisian feel architecturally. And the rain actually made it look even prettier!

In the afternoon, I took an extended wine tasting tour at Bodega Concha Y Toro. It was quite tasty, although I wish I had had the chance to visit some smaller bodegas as well. Getting out there was actually quite an adventure! While there are plenty of tours that will take you out there, it seems like a waste of money to me, since you can get there by public transportation. You take one of the subway lines pretty much to the end, in the southeast of the city (or at least the bottom right of the subway map!) This took me less time than I thought it would, so I actually killed time by riding back part of the way and then headed back again. Since it was raining, I figured it made sense to stay somewhere dry, since I had no idea what kind of neighborhood I would end up in.

Once I got off the metro, I stopped to ask for directions to where to pick up a metrobus. The lady in the tourist office had given me the numbers of buses I could take, and one came pretty quickly. I asked the driver to tell me where to get off, and we were off!

We drove out of the city towards fields and vineyards. At one point we passed a building that looked like it had tour buses parked in front, and someone got on in a Concha Y Toro shirt, but the driver didn’t say anything and I figured that maybe this wasn’t the entrance and we’d circle around to a better stop. Well, we started heading out into the countryside – very green and pretty, and amongst vineyards, but I definitely had the feeling that we were heading out into the boonies. I asked the driver, and he exclaimed in woe that he had completely forgotten to tell me where to get off! However, the bus in the other direction was in our sight, so he told the other driver what had happened and I got on in the other direction without having to pay another bus fare. Getting out of the first bus and running around in the rain to the second, I certainly felt like I was in a comic movie!

This time I kept my eye out, and when we got to the stop which I suspected was mine, I asked the driver if it were the one for Concha Y Toro. He too exclaimed that he had forgotten he was supposed to tell me where to get off, but yes! This was the right place! And so, after sloshing through the mini waterfalls that were supposed to be the sidewalk outside of the Concha Y Toro bodega, I arrived only a few minutes late. Since that meant I got to skip the prepared video telling everyone about Concha Y Toro (similarly polished like the one at Chandon), I was happy to be late.

We saw some cellars and then were treated to a bit of a sound and light show in the casillero de diablo (the name of one of their lines of wine, the Devil’s cellar). Pretty cheesy, but I was prepared for the cheese by reviews on Tripadvisor. I had some wine tasting with the group and then a group of four Brazilians and I went to a separate tasting room for our wine and cheese pairings. (We’d all paid for the extra wine tasting with the higher quality lines of wine.) We then all took some (lots of!) pictures of each other and took the bus and subway back.

The obligatory barrel shot at the vineyards of Concha Y Toro 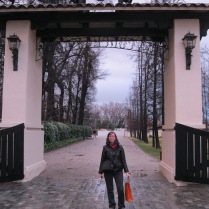 Me at the gate of Concha Y Toro

Leaving the vineyard
When I got back, I booked a shared ride van to the airport. The company insisted on picking me up before 3:30am so I’d be at the airport three hours early. Not necessary – I had to wait for the check-in lines to open. My room at the hostel was no longer all my own – there were some Italian men who were put in there, despite my having reserved a women’s-only dorm. I’m sure I could have straightened it out with the front desk, but since I was only able to take a two hour nap, it wasn’t a big deal and I didn’t even bother trying. It turns out that the Italians also had an early flight and spent the night awake in the common area – I ran into them at 2:30 in the morning when I came downstairs to wait for my ride!

The return to Argentina was otherwise fairly uneventful. I slept, waking up to catch the tail end of the Andes, then fell asleep again. The mountains were gorgeous, but I’m glad that I took the land route going!