Yes, I know that’s rather a “duh” statement, but nevertheless it must be said. After all, it messed up my plans to visit temples on Friday, since it poured rather than simply rained. The hotel suggested I head to the MBK Shopping Center, and gave me a ride in the hotel tuk-tuk to the BTS station. I wasn’t in the mood to shop (or to carry any purchases around for two months when I was going to return to Bangkok), but I had heard that it had a great food court with essentially street food in a more sanitary environment than the street. (I really want to try some street food but most of the places I’ve seen so far look to have left out the food for a while in the heat.)

The food court really is great, with food from all over Thailand as well as some Chinese and Vietnamese options. (All this without even venturing to the floor below’s touted international food booths.) I put 200 baht on a food card and bought pad thai with glass noodles and mango with sticky rice – and still had money left over at the refund counter! The food was good and cheap enough that I actually went back the next day for some coconut milk curry chicken from southern Thailand.

MBK reminded me of the shopping center in Irkutsk – more little booths than shops. It may be a good place to find a tailor, since I saw several. There’s a movie theater there too, and I debated going to see a movie that afternoon. Instead I opted for some Thai massage at the hotel followed by blogging and figuring out my itinerary for the following week or so.

Thai massage is very different from the massages I’ve had in the US. They move your legs and arms all over to stretch them – I haven’t had such good turn out since I did ballet!

The next day, we had sun in the morning, so I hastened to the river to go temple touring while it lasted. I headed first to Wat Pho, home of the Temple of the Reclining Buddha as well as numerous of those bell-shaped structures that I now have learned are called chedi. The chedi were so ornate, it almost felt like being inside a box of cloisonné bells. The Reclining Buddha is enormous – 46 meters, if I remember correctly. It’s also easily the most touristy part of the complex.

Wat Pho, temple where the Reclining Buddha is housed 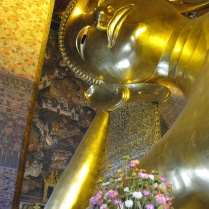 Just to show you how big the statue is (46? meters)

Feet of the Reclining Buddha 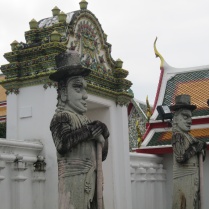 These looked like giant bells all around the temple

One of the many animal statues at Wat Pho 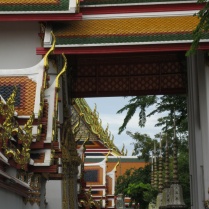 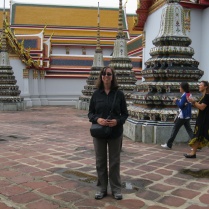 Me (and random others) at Wat Pho 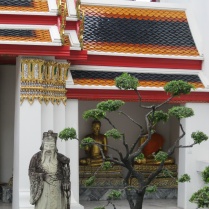 One of the courtyards lined with Buddhas at Wat Pho

After thoroughly exploring the complex, I headed to the ferry that crossed between Wat Pho and Wat Arun. It’s smaller than the Chao Phraya tourist boat and we felt the water’s choppiness much more. We made it across and I headed through the hawkers to the (what looks to me) Khmer-style Temple of the Dawn or Wat Arun. The heat was getting to me pretty badly, so I decided not to climb the ladder-like stairs, but I got my fill of the view from below. 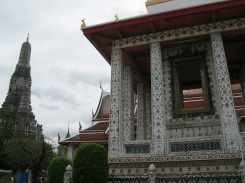