I arrived at the bus station in Chiang Mai and took a tuk-tuk to my hotel. It’s the first time I’ve ridden in a tuk-tuk that actually makes the sound for which they were named!

Once safely arrived, I had much of the late afternoon free, so I decided to walk to the old city and take a leisurely walk around. Chiang Mai is essentially Thailand’s capital to the north: an ancient city filled with wats (over 300 I think I’ve read). Just walking to the northern gate of the old city, I passed two or three. They are quite impressively beautiful, with gables in jewel tones highlighted with gold. 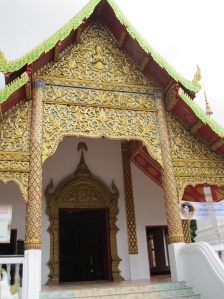 Another Wat passed on my way into the moated old city:

Chiang Mai has a very specific feel. The old city felt a little like Kyoto with its narrow winding streets and mix of old and new, although it has many more new(ish) buildings. Newish compared to traditional Kyoto buildings, anyway! What struck me immediately, though, was how many westerners were around, backpackers and expats alike. Several restaurants advertised full English breakfast fry-ups and there are an astounding number of secondhand bookstores primarily specializing in English language books. One other thing I noticed, which detracts from the atmosphere, is the number of older western men with younger Thai women. It wasn’t as bad as I’d read – the women weren’t on the whole very young (I’d say most were in their twenties). I’m not judging relationships with big age disparities as I know several couples back home with age disparities and great marriages. The dynamic seems very different here, however, more on the mail-order Russian bride scheme of things.

The next day, fortified by a good night’s sleep, I headed in to orient myself by going to a few museums. First off was the Chiang Mai City Arts and Cultural Center, with engaging displays about the history, geography and traditional jobs and pastimes of Chiang Mai. Apparently Chiang Mai was founded by three kings – the statue in front of the museum reminded me of Yul Brenner in The King and I, so apparently score one for the research done by their costume designers. 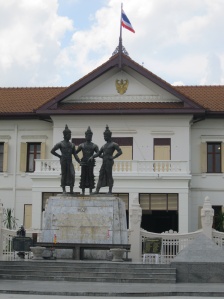 The Chiang Mai Historical Center is right behind the other museum and continues with a detailed discussion of the city’s history. I think I’d have been just as happy skipping this one. Since my feet were hurting after this museum, I grabbed some lunch and then went to the third covered by my museum pass, the Lanna Folklife Museum. This was hands-down my favorite, with a room full of textiles, another of the red and gold painting found on so many wats, another on the region’s different baskets, and so on. It really helped to put a context together for my Wat explorations.

Which I continued after the museum, heading to Wat Chedi Luang and the City Pillar. (There might be another Wat tucked in there too.) 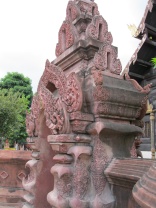 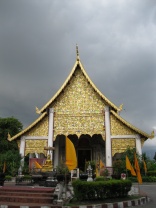 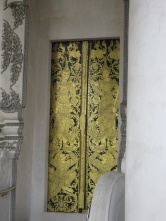 It started pouring, so I ducked into a cafe for some tea and cake and headed out again once the rain had stopped. Here a few more pictures from the day, most from Wat Chiangmun. 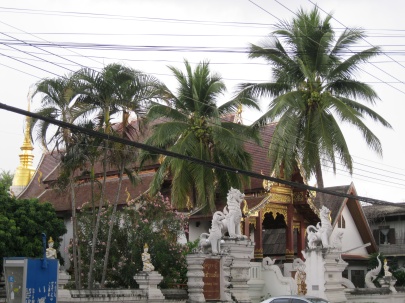