I felt some sadness when it finally came time to leave Luang Prabang and the Manichan Guesthouse, though I was thrilled to be traveling with Sadaf, Georgina, and two Belgians, Roxane and Pierre, to my next destination, Phonsavan. Phonsavan is a little town in the middle of Laos, a staging point for tourists who want to explore the Plain of Jars and to learn about the current impact on Laos of the “secret war” of the late sixties and seventies. (The “secret war” refers to unofficial US involvement in the war in Laos which took place at the same time as the Vietnam War. This war has a heavy civilian toll today, as many of the bombs dropped during that time remain unexploded over the Lao countryside, and frequently explode when farmers or children find them.) I learned a lot about the effect of UXOs – unexploded ordnance – on Laos, and will write about the NGOs I visited in a separate entry so that their stories are given the weight and importance they deserve.

The five of us headed to the bus station in Luang Prabang to get our minivan to Phonsavan. When we arrived, we were dismayed to find that there were only four seats left. Luckily there is strength in numbers, so they got a second minivan out and we got to choose our seats. Thank goodness none of us had to ride in the fold-down bucket seats! It was quite a twisty, often bumpy ride on mountain roads with spectacular views.

The view from the rest stop on the way to Phonsavan

The touts were insistent when we arrived in Phonsavan, and since Georgina, Sadaf and I didn’t have a guesthouse booked, we agreed to check out one of them and got a ride into the town. We told Pierre and Roxanne that we would meet up with them after we had found our lodging.

We didn’t love most of the places we saw, but finally settled on one towards the end of the strip of guesthouses. (Phonsavan looks like it’s a one horse town that sprang up to deal with the influx of tourists.) We tried to communicate with the landlady in English with limited success, so we pulled out our guidebooks and used the little dictionaries in the back to communicate in Lao. The guesthouse owner’s face broke into a huge smile – it’s amazing how a limited attempt to speak the local language can lead to so much goodwill!

Then we set out to book a tour to the various jar sites for the following day. We sat down to negotiate a cheaper rate at one tour office, letting them know that we would bring two more people to the tour so we should get a discounted rate for a five person tour. Before we could head off to find our two others (Roxanne and Pierre), we were told by a young man who came up that they had already booked a tour with him. This sounded a little fishy, since they had sounded happy to go in a group with us, so we headed over to their hotel to straighten things out. It turns out that this one individual, one of the touts who greeted the minivan, having seen that the five of us were traveling together but were staying at different hotels decided to be clever. He tried to divide and conquer to make sure we booked with the tour company he wanted us to. He had told Roxanne and Pierre that we had booked with this company so they should too, and since they had no reason to believe he was lying, they purchased the tour (at the full price and not, of course, at the lower negotiated price). This of course put all our backs up, so we trooped back to the tour agency to insist that they put us together on the same tour at the lower price agreed to earlier. Ultimately (thanks primarily to Georgina), they refunded Pierre and Roxanne the money, and we left for an early dinner at Craters (which I felt was completely overrated, by the way).

The next day, we set out on a tour that visited three jar sites. Nobody knows what these huge, megalithic jars were used for or when exactly they date from, but over fifty sites are scattered all over the plain. One theory is that they are ancient burial sites, though a more charming story is that they are the very large whiskey jars of some historical king who was celebrating something that clearly required a lot of whiskey. Most sites have not been cleared from UXOs, although the three shown on most one day tours have been. Nobody wants bits of tourists blown all over the site – it would look bad on the Lao government’s application for UNESCO heritage status.

Before we got to the first site (which was actually Site 3), we stopped at a little house where a lady made lao lao, or Lao rice whisky. She offered everyone a taste (at 9 in the morning, I refused) and then filled up a water bottle with it for sale. 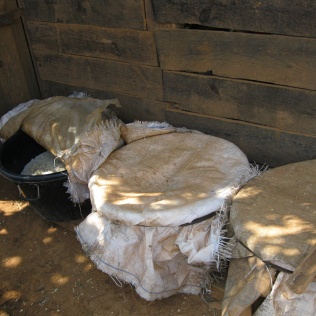 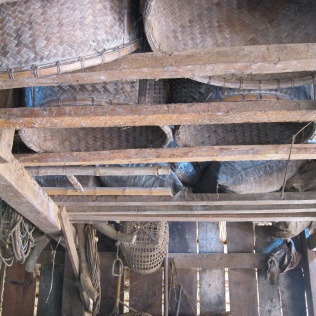 Baskets stored in the rafters of the lao lao “distillery” 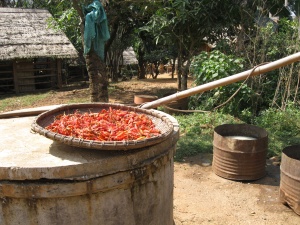 Chilis drying in the sun

The house was on the side of a dirt road, and I think these red dirts roads along with bright, bright green rice fields form one of my most vivid memories of Southeast Asia. You just don’t get this color road back home, and it will always be synonymous with exotic, less developed locales to me.

We also passed one of the little huts that we had seen throughout the countryside. Our guide took a few minutes for us to stop and check it out – it was a hideaway for someone to use to trap sparrows.

Jar site 3 lies in the middle of rice paddies, so we had a nice stroll through them to get there. We were warned to stay within the MAG (Mines Advisory Group) markers, as those designate the area cleared from UXOs. 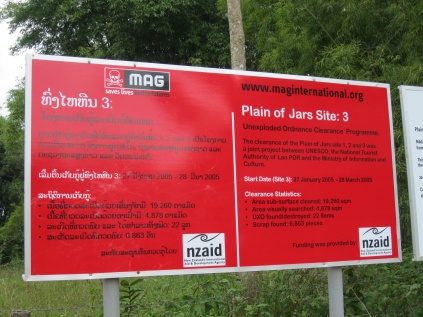 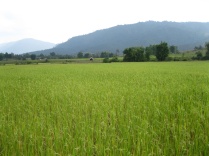 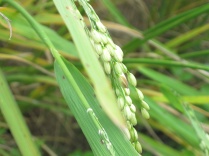 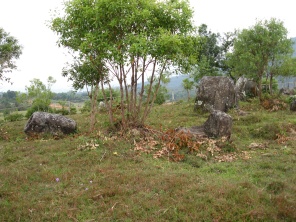 First glimpse of a jar site 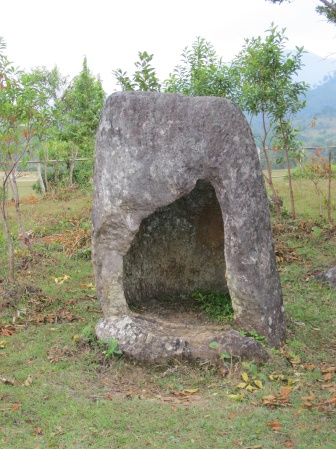 No jars were harmed in the taking of this photo

Jar site 2 is at the top of a hill with a splendid view of the surrounding area. 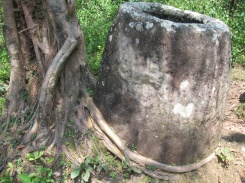 We got to see the remnants of a Russian-made tank, though it was pretty anti-climatic. Everything of value had been stripped years before.

We had a decent noodle lunch and then were off to Jar Site 1, with a few jars scattered on a hilltop amongst the remains of trenches from the war, and a path down to a huge flat area covered in the jars. Nearby lay a cave where the Pathet Lao hid people and vehicles. 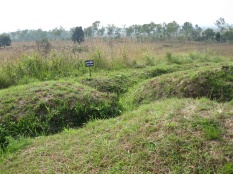 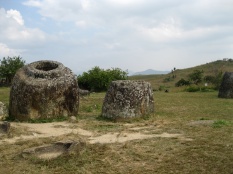 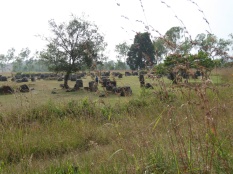 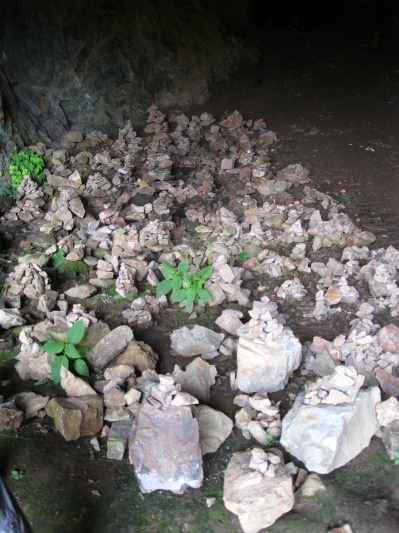 Piles of stone for good luck in the Pathet Lao hideaway 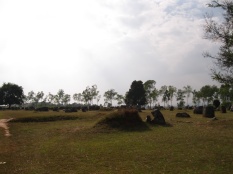 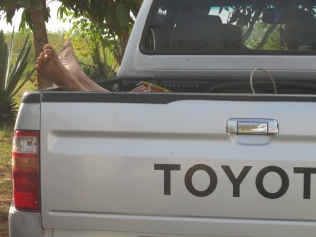