Saturday morning was rainy and chilly, so I decided to use my Sydney Living Museum pass and check out two other museums located near Circular Quai. The closest, which is only open on the weekends, was the Justice and Police Museum.

I figured it would be a quick walk through but ended up taking a guided tour, which gave life to the old building and cases that were discussed. My favorite room was the old front room of the police station, redone as it might have been in Victorian Sydney. I half expected to see Constable Collins from the Miss Fisher’s Murder Mysteries step into the room! 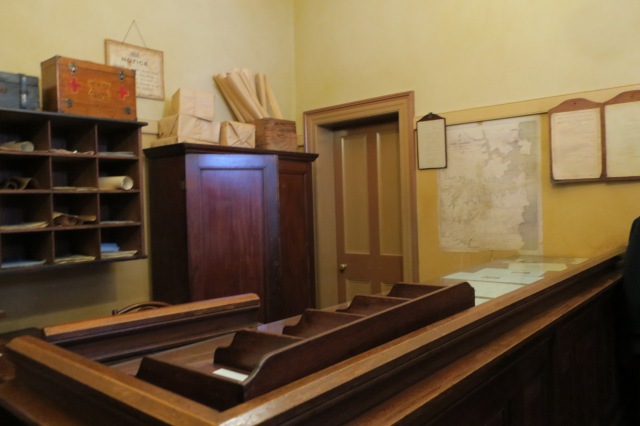 As it was still raining a bit, I visited the Museum of Sydney that was just up the road. Compared to the other two living museums, this museum just felt a bit slight. There wasn’t much there. Historically, the site is important, but the other museums do a better job of bringing the past to life.

The rain having stopped, I headed over to the Rocks, as I needed to stop by the Visitors Center and also needed some lunch. Lunch actually became tea as I stumbled across the Tea Cosy, which stated that it had the best scones in Sydney. I don’t know if they’re the best – I haven’t completed the experiment yet! – but they were piping hot and tasty.

After completing my errands, I figured I might as well visit the last museum that was part of the Sydney Living Museums pass, the Susannah Place Museum. This museum, similar to the Tenement Museum in New York, showcases rooms furnished in a historic manner in the setting of an old building that has not been restored, but rather left to show the changes and layers of time. It’s an archeological site of social history, if you will. For example, one kitchen floor was peeling so that you could see the layers of newspaper under lino that had been placed there as insulation.

Susannah Place is very special, in that these buildings are 170 years old (built in 1844) and pretty much at least one if not all of the residences were occupied until it became a museum. For a young country like Australia, that is a large portion of its European (as opposed to indigenous) history. (It’s been interesting and a little odd being in a nation younger than my own – I am so used to traveling places that have a long and storied history of nationhood.)

I took another free walking tour, this one of the Rocks, and then wandered about admiring the displays for Vivid. Vivid is a several week long festival part of which centers around light displays around various parts of the Harbor and CBD. The Opera House had about a 20 minute loop where the sails transformed into one magical landscape after another, a bright end to a grey day. 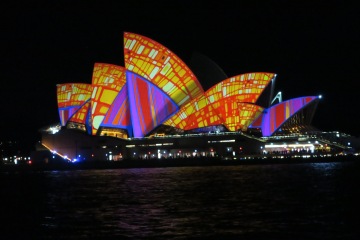 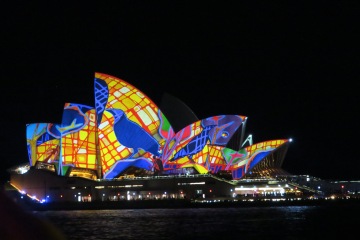