Wednesday was a bus day, spent traveling down the middle of the North Island via Highway 1.

The trip out of Rotorua was again reminiscent of the Shire, with all these oddly shaped, very lush green hills, plumes of steam visible. 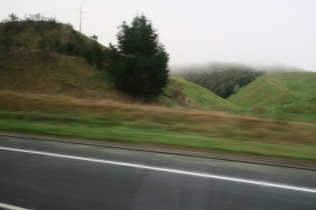 Then we got to Taupo and the lake. Snowy volcanoes in the distance, part of Tongiriro National Park (near where the volcano that was used as Mt Doom in the Lord of the Rings movies is located). The lake itself had waves and was this deep blue color except right near the shore, where it was greeny-blue, like an ocean.

As we went around the lake, there were cliffs visible, making such a striking landscape. 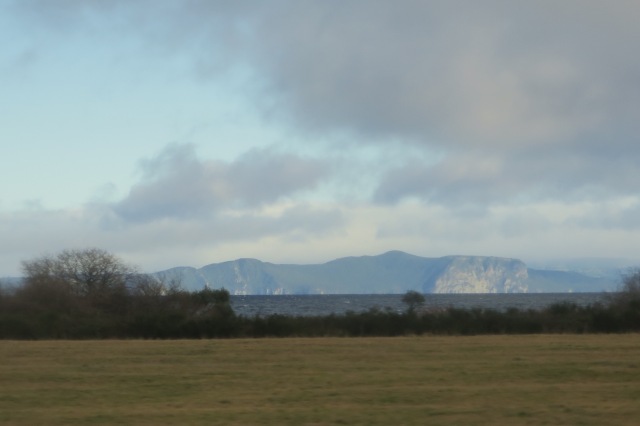 I believe in this part, we were still on the geo-thermal explorer highway, but after we left the lake and paralleled those snow-capped volcanoes, we emerged from the forest-covered hills onto the dessert road. We were surrounded by scrubby plains, the majestic mountains towering in the distance.

Then we re-emerged into hills, some seeming knobbly like they were covered by sheeps’ fleece, and dry, so they were a straw color. And they were spotted with sheep and some cattle, as were the greener hills we emerged onto.

We had lunch at a remote rest stop where I had a tasty lamb and mint sauce sandwich (seemed apt since we were in sheep country), and then continued on through hills until we headed closer to the coast. I must admit I fell asleep for part of this, waking an hour before we got Wellington. I was in time to see us hug the coastline and then turn inland through Wellington suburbs.

I ventured out into the city for dinner, trying some green lip mussels. (They really do have a green color around the edge of shell, and are much bigger and somewhat chewier than the mussels you get in the US or Europe.) 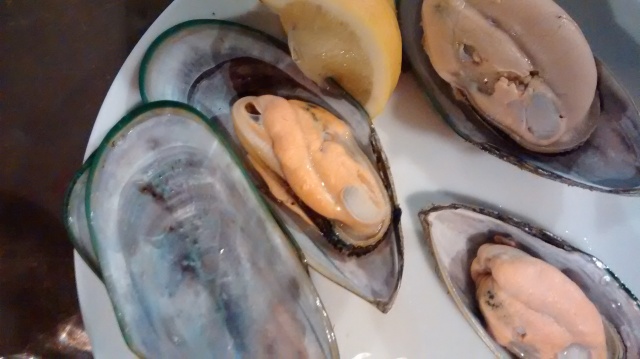 From what I’ve seen so far, I really like Wellington!