On Friday, I left the North Island via the ferry from Wellington to Picton. I’d heard great things about how beautiful the scenery is on this crossing as you head into the Queen Charlotte Sound, and was excited to find that it was a beautiful – if quite cold – day.

I went out to the observation deck, located at the rear of this particular ferry, to admire the view out the Wellington harbor.

It was quite windy so I sought refuge inside in the lookout lounge, which faced forward and had floor to ceiling glass windows in the middle. I was lucky enough to get a seat in front of one of them, which made for a prime viewing spot (if not a prime photo spot due to reflections on the glass).

Wellington harbor seems to be protected by a couple of arms of land, so we headed towards one then turned to make our way out to the Cook Strait. 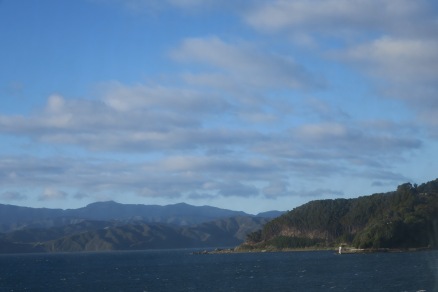 Across the Strait we could barely see the South Island, some snow capped peaks visible to our left. We turned right, however, and headed towards what looked like a solid shoreline.

Somewhere in the middle of the crossing, the scone cart came around, with freshly baked scones. I could get used to that on my travels!

Once we got quite close, we could see there was a break in the cliffs, which let us enter the Sounds. It was gloriously beautiful! 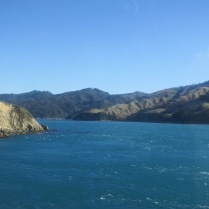 Close to Picton, we saw a mammal in the water, most likely a seal.

I walked from the ferry to my B&B. I had been upgraded from the B&B I had originally booked to another property owned by the same people, as they were doing work on the first. The new property was beautiful – but since it was winter, I found, I was actually the only person in the entire building (including the owner not being there)! The owner had arranged to have a friend or colleague meet me and get me settled in. That lovely lady had even set up a fruit plate and pastry for me in case I was hungry.

Despite it being a little strange to be alone in the B&B, it was actually really restful and peaceful. Just what I needed after all the early mornings!

I took a country walk before it got dark. It’s a beautiful area, very hilly. (Not surprisingly, that’s a pretty common refrain in new Zealand!) The most breathtaking view, however, was straight out of the harbor into the Sound.