Tuesday was my day to spend exploring Christchurch.

I briefly ducked into the Canterbury Museum but didn’t have much time before meeting my new friend (D) from Sunday’s bus ride, so I don’t really have much of an impression of it.

I met D and she proceeded to show me some of the notable spots and street art in the city center, and put in context some of what was there before the earthquakes. It was a wonderful opportunity to appreciate the city. Tourists and travellers often make quick judgements as they pass through a place, and unfortunately a snap judgement about Christchurch would likely be one of dismay that there is so much rebuilding to do. And that is a fair assessment. Christchurch in five or ten years will be a different place from what it is now, and is no doubt a different place now than it was. However, there are definitely still things to see, and there is a vibrant if still recovering city.

I mentioned a few days ago that it’s interesting to see the interim art and installations around the city. One temporary building that is on every tourist list is the Cardboard Cathedral, an interim structure built with what looks like huge hollow cardboard dowels as part of the support. The interior is rather Scandinavian modern, and it’s overall a light-filled, peaceful place. Lovely in its own right, yet very different from their old Cathedral, which five years on remains open to birds and the elements as they still have not decided what to do with it. The city and many residents want it restored, but apparently the church wants a new cathedral and so didn’t allow it to be protected from the elements. In the meanwhile, it remains in limbo, and seems like a painful reminder to citizens of Christchurch. 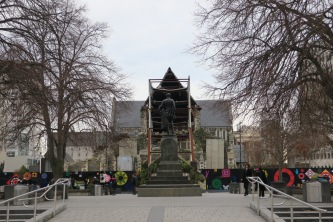 As I mentioned, there is a fair amount of street art and pop-up installations. D showed me a bar in a bus, that started in the aftermath of the quake and is still going strong. Other pop-ups are moving into more permanent structures (for example, some of the shops in re: START) or, in the case of street art, are getting covered up by new construction. It’s a rapidly evolving city, it seems, though it does have a long way to go to rebuild. 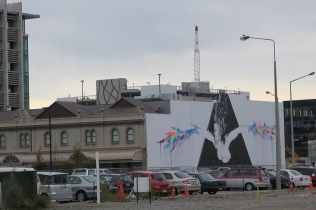 One installation is a set of white painted chairs, one for each person who lost their life in the quake. There are baby carriers and wheelchairs as well. I’m not ashamed to say that I cried, especially after reading the message in the visitor book left by a couple of kids.

Christchurch is still a city of gardens. After my friend left, I spent some time in the lovely Botanic Gardens. They may be my favorite amongst all the botanical gardens I have visited thus far. 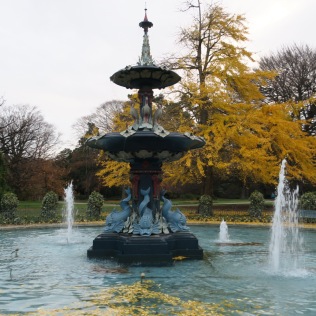 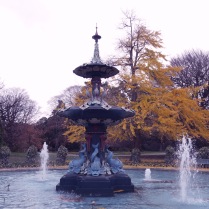 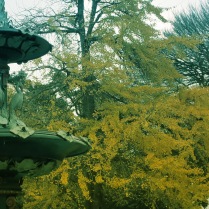 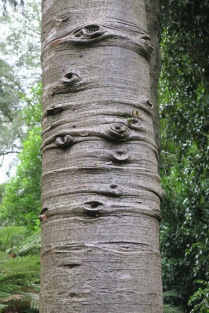 I then walked around some of the areas I had visited earlier and managed to go in circles because of construction closing sidewalks. Oh well. 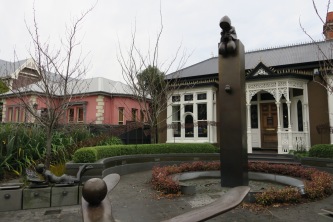