On Sunday, I headed up north, taking the train up to Sukhothai. The Sukhothai Historical Park houses the remnants of the 13th-14th century capital of arguably the first Thai (as opposed to Khmer) kingdom.

The train went to Phitsanolok, about an hour from Sukhothai. The trip was on a two-car special express train – I was rather puzzled to see the train because the car I was in seemed to be the engine! If you looked straight ahead down the middle of the car, you saw a door and the train tracks stretched ahead. I had bought a snack for the train, but surprisingly they served us complimentary cookies and coffee, and them later some curry for lunch.

The scenery was definitely interesting. We passed through Ayuthaya, another ancient capital, and could see tantalizing glimpses from the train tracks. Next we passed through Lopburi, where clustered around a shrine were more monkeys than I’ve ever seen before, in the shrine area, walking to it, in the street. Remember the deer in Nara? Well it’s the monkeys in Lopburi in much the same way.

We passed a lot of water, explaining why traditionally Thai houses are on stilts. We passed lots of those, too. There were many water lilies and more crane-like birds (herons, egrets, don’t know) than I’ve ever seen before. I saw some emaciated cow-like animals that seemed to have a hump (so I’m not sure if they were cows and I could just see bone structure normally hidden on a well-fed cow, or if they were some hybrid). I even saw a water buffalo!

I noticed a Western couple getting off the train at the same time so I asked whether they were going to Sukhothai and if so whether we could go in a group. As we stood looking at a map of Phitsanulok, a couple of guys speaking English joined us and we decided that a tuk-tuk to the bus station made sense. So five of us AND our luggage somehow squeezed into one tuk-tuk and away we went.

We found the bus to Sukhothai pretty easily and sat in the back by the luggage. It was a local bus, so it stopped frequently to let people on and off. A bunch of tiny older women got on, clearly coming back from selling their wares at the market. Our backpacks gradually were surrounded by piles of (probably handmade) baskets, bags of chili peppers, and finally a mesh bag of (live!) frogs. It was a great, if not terribly comfortable, trip.

The humidity in Sukhothai made the Bangkok-like heat feel 10-15 degrees hotter as we trekked to out hotel. (Turns out the first couple I had spoken to were staying at the same hotel.) Luckily, the hotel was beautiful (think teak cabins and beds with mosquito netting and a princessy feel) and, more importantly, had air conditioning. I really needed it after walking around – I’ve never been as sweaty in my entire life as during the few days spent in Sukhothai!

The following day, I set out to explore the center part of the historical part on foot. I started with the museum and then headed into the park. Some of the ruins are little more than that, while others have enough left (or reconstructed) that they are mind-blowingly beautiful. It’s just a bunch of pillars and water and serene Buddhas. I’m not sure whether some of the reconstructed ruins have been overly reconstructed, but it is a UNESCO heritage site and they do tend to be quite picky about that. Anyway, I loved it, despite being taken aback by how manicured the park is.

Chedi and pillars at Wat Matathat 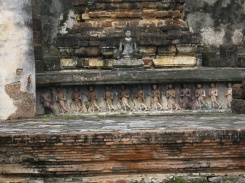 Me at Wat Mahathat

Not all chedis look the same…

Another view at Wat Mahathat

Wat Si Sawai from the front

Wat Mahathat from the back

Another view in Sukhothai Historical Park 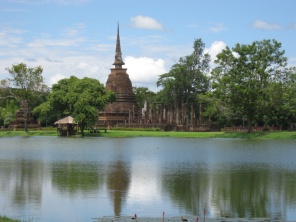 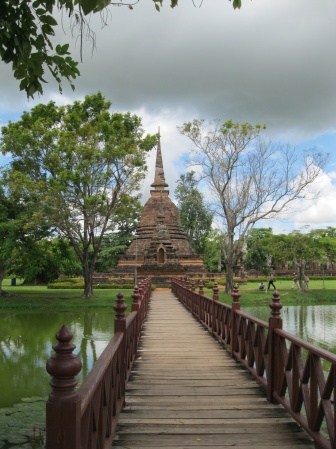 I had lunch at a noodle shop patronized by several of the pink-shirted park staff (delicious Sukhothai noodles) and then called it a day. I spent the afternoon reading and posting in the blissful air conditioning.

I had planned for two full days in Sukhothai, which let me be very leisurely. I booked a tuk-tuk to the northern part of the Historical Park since it seemed too far to walk in the heat. It was early enough that I beat the crowds, too. The Buddha at Wat Si Chum is beautiful. I’m so glad I didn’t miss that part of the park! My tuk-tuk driver was very sweet, off-roading a bit to get me as close to the monuments as possible. I’d have been fine with keeping our exhaust away from the ruins, but there wasn’t any way to communicate that so I accepted the offering with the spirit with which it was intended. He also picked up a turtle crossing a road so I could hold the poor creature – luckily we passed a later pond so I could set him free again!

I saw them everywhere around Sukhothai 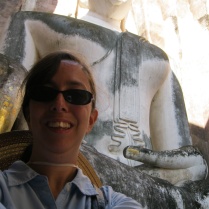 To give you an idea of the scale

Another Wat in the northern section of Sukhothai

The other Wat at the north of the park

It wasn’t even ten when I finished my tuk-tuk tour, so I wrote postcards and then walked a mile or more to the post office. People on the whole are so friendly here – I had some random people wave and yell “hello” to me in Thai and English!

I wrapped up the day with an oil massage. Massage is so cheap here!