On Monday, I headed to Moscow. I had used the same British travel agency (Real Russia) who had done my visa sponsorship and booked my Trans-Siberian tickets. Highly recommended!

For this leg of the trip, I had an e-ticket, so I didn’t need to exchange it for a paper ticket as I had my Trans-Sib ones. Yay, one incomprehensible interaction avoided! (Although in all fairness, so many more people speak English in St Petersburg and Moscow than elsewhere in the country.)

I had booked the high-speed Sapsan so as to avoid another overnight train. Apparently the engine is made by Siemens – I kept seeing ads on tv for Russian Railways talking about their working with Siemens and another company I can’t remember. Anyway, the Sapsan to me (not being terribly interested in trains) looks like other high speed European trains inside and out. But for those of you who are train nuts, here’s a picture 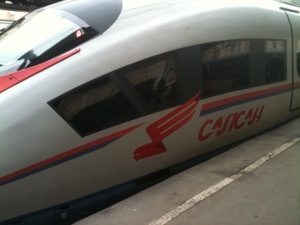 I will mention that I am proud of myself for being able to put my backpackers backpack on the overhead shelf without help. I’m a big believer in not packing more than you can carry/manage yourself provided you are young and healthy and not moving somewhere, but it’s not easy to practice what you preach when you’re traveling for months at a time and you have the wimpy upper body strength that I have.

I took the metro to the stop the hotel had listed, found a map outside it, and figured out where I was going. I walked along, realizing with delight that the red building to one side was probably the Kremlin, that really was a brief glimpse of St Basil’s, and the historic center of Moscow is much prettier than I’d have thought, with a number of neo-classical buildings. I’d been expecting something, well, something Soviet, I guess, massive and without frills.

My hotel was only a 10 or 15 minute walk away from the metro, and they were able to give me a room on the top floor. I could see the Kremlin and what I later realized was one of Stalin’s Seven Sisters buildings from my room: 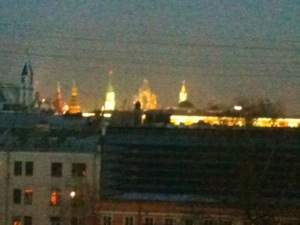 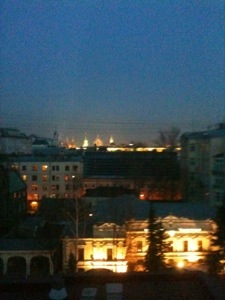 I’ll put in a quick plug for my hotel, the City Center Courtyard Marriott. It was in many ways the nicest Courtyard I have ever stayed at (despite being a business hotel, and despite my great fondness for my Courtyard in Irkutsk) and the location is amazing. I’m just glad I booked it with points, as I think it might have been over $500 a night if you include the breakfast I got for free because of my status. Moscow really is the most expensive city I’ve stayed in – I spent more on food and museums than anticipated, even compared to Tokyo.