Tuesday, my first full day in Moscow, was the day for visiting the Kremlin. The Kremlin itself is a cluster of historic cathedrals around the Cathedral Square, several government buildings including what I think is the upper house of Russian government, a garden which we couldn’t go into (perhaps because it was too close to the government buildings), the building called the Armory which houses a museum containing Imperial treasures, and the walls and towers surrounding them. The cathedrals are covered with frescos inside, which I personally find more appealing than the iconostasis (wall of icons). Perhaps because it’s Moscow, or perhaps because it’s such a big tourist destination, or perhaps because these churches are pretty much now museums, they didn’t insist on women covering their heads in the churches (an important sign of respect in Russian Orthodox churches). I did, however, and felt quite silly being the only person doing so until some Russian women came in and also used shawls to cover their heads.

Anyway, here are some pictures of the Kremlin and the Cathedral Square, including the obligatory awkward self pictures to prove I’m really seeing these sights. 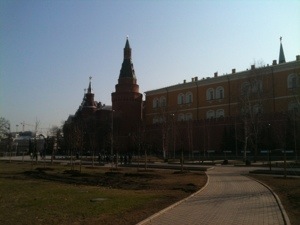 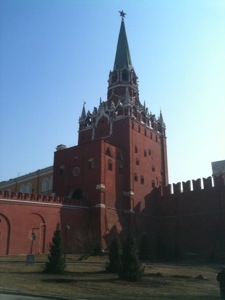 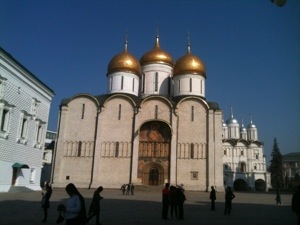 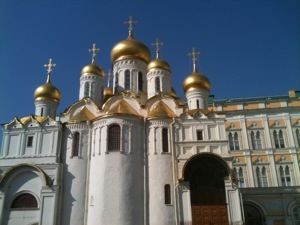 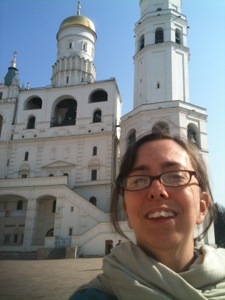 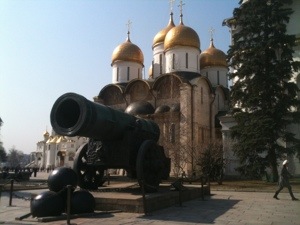 I hadn’t originally bought an Armory ticket because they cost twice that of the Kremlin and I didn’t really care about seeing silver plates. Then I realized ten Faberge eggs are there, so I caved in and went. Only seven, sadly, were on display. The one celebrating the completion of the Trans-Siberian was one of the missing ones, but there were still some lovely eggs (and some less lovely as I thought them overly ornate). My favorites include one that is covered in enamel clover leafs and a gold egg that is a clock/vase with flowers.

I also greatly enjoyed the display of coronation gowns and mantles from the early 18th through the 19th centuries. One of the 19th century ones had such a tiny waist that I have to wonder whether that empress actually deformed her rib cage with how tightly her corset was laced.

After the Armory, it was time to head to Red Square! As soon as I got there, they started clearing it and cordoning it off. Perfect timing! At least I got some photos minus the crowds.

I hung around for quite awhile, thinking maybe I’d see Putin (aka a car with shaded windows). Nope, just three cars with their roofs down and with a soldier standing in each one as they drove in a procession…that was literally driving in circles. Strange. I think they may actually have been trying to block off the square to prevent demonstrations about the embezzlement trial of a main opposition figure and anti-corruption blogger, Navalny. There is a lot of concern in Russia that this is completely politically motivated and fabricated, as local investigators had closed the investigation through lack of evidence, according to the Moscow Times.

After the Red Square, I checked out GUM, a pretty white 19th century building on one side of the square that is essentially a designer mall (they call it department store) today but was, in Soviet times, notorious for long lines and few items on the shelves. 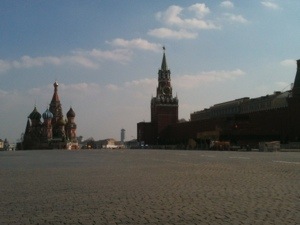 2 comments on “The Kremlin”