I really wanted to see the Gulag Museum so headed out in that direction first thing. The museum doesn’t open until 11, however, so I thought it appropriate to start at Lubyanka Square, where so many prisoners started on their trip through the Gulag Archipelago that Solzhenitsyn made famous.

A quick definition for those of you who do not know what the Gulag is. It’s an abbreviation referring to the administration of camps, and the camps referred to were hard labor camps to which political prisoners were sent between 1930 and 1956. Who were political prisoners under Stalin? Anyone and everyone: priests, kulaks (peasants who were thought to be rich – aka not in penury), Germans, Chechens, writers, dissidents, anyone who looked at someone wrong, and the list goes on. The number of people moved in forced migrations and through the camps number around 28 million. Millions of those died from the brutal conditions. Others were shot. Think of the work camps of Hitler being carried out for 26 years and you get an idea.

Lubyanka is an innocuous looking, but huge, building on one side of the square. Its name is synonymous with secret police. It housed the KGB and Lubyanka Prison (a political prison) and now houses the FSB. A little way away from it is a stone, a monument to the victims of terror. A poster shows some of the faces of the 40,000 shot during various periods of terror during Communism. This little monument didn’t seem to get much attention when I was there, but a number of wreaths bear testimony to the fact that there are people who care.

Chillingly, Lubyanka Square is just a few blocks from the lovely building that houses the Bolshoi ballet. Go up the street to the right of the theater, passing designer boutiques, and you’ll come to a narrow entrance way with barbed wire at the end. It’s the Gulag Museum, whose courtyard is set up like in a camp, complete with wooden guard tower.

It’s a three floor museum. Starting on the top, you see a gallery of artwork made by Gulag survivors and a number of personal effects. Each cluster of items belonging to a person has a card next to it detailing that person’s reason for arrest and time served. The bubushka monitoring the room sold me a couple of books about the Gulag that seemed to be local print runs: a book written by two women survivors and another book about resistance in the Gulag.

The ground floor room is currently housing part of the exhibit The Commissar Vanishes, exploring photo manipulation primarily under Stalin. It’s fascinating to see who is cropped or airbrushed away, and the difference in levels of sophistication.

The basement continues the exhibit, but in a venue that looks like a room for Gulag prisoners. To one side is an isolation cell. It is extremely difficult to come out of that museum unmoved.

Next it was back towards the Red Square, to the State Historical Museum. While I think the museum is fine, the English descriptions are outdated or lacking. My biggest issue with the museum, though, was my own fault. I had misread the description and thought there were rooms set up like interiors from different periods, but they were actually just painted in the fashion of those time periods.

I was hoping to head to St Basil’s, but once again Red Square closed as I got there. This was starting to feel personal!

Back to the hotel to rest my feet, then out again to Arbat Street to stroll and watch the street musicians. Arbat ends on a square housing the Ministry of Foreign Affairs, one of the buildings known as Stalin’s Seven Sisters buildings, a huge building with neo-gothic embellishments that is surprisingly (ok, to me, I admit bias when it comes to Stalin) attractive. I was happy to see it as I had thought I wouldn’t have any chance to see the Seven Sisters, and while the area around the Kremlin is lovely, it pre-dates Soviet Russia which is of some interest to me.

I ventured out one more time to see Red Square at night. I’d heard its ethereal. I think I must disagree with that assessment. Maybe I went too early, and the weather was really nice and warm so people were out in droves, but the GUM building had stadium lighting and there were lots of crowds. My assessment: pretty, but not that different from the day. I could imagine it being ethereal at 2am in the snow, however. 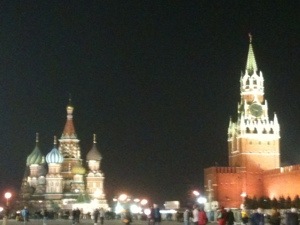 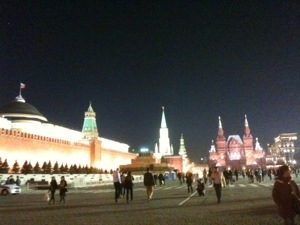 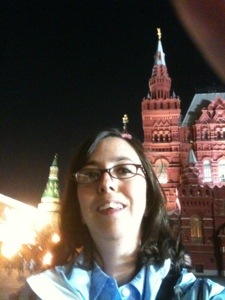