Sunday and Monday were busy, interesting days! I’ve realized that I don’t have a long time left in Buenos Aires (how time flies!), and I want to take advantage of it.

I had been intrigued by a description of a feria (fair or market) that takes place in the very southerly barrio of Mataderos. It’s known for its singing, dancing, and gaucho-related activities, along with artisanal food, drinks and crafts. The other advantage is that it’s off the beaten path, taking an hour by bus to get there. It was definitely worth it, though! I bought the best dulce de leche ever and had my first choripan (chorizo on bread). We heard live music and even saw people dancing a handkerchief dance to it. As seems to be common at ferias (at least, I also saw this in San Telmo), there was a table loaded with goodies baked by local women. Of course we had to try a piece of cake! We wrapped up the day with a little more shopping, at Ateneo, the prettiest bookstore ever. 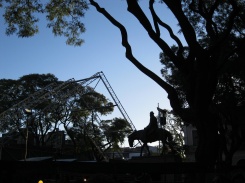 Statue of a gaucho at the Mataderos Feria 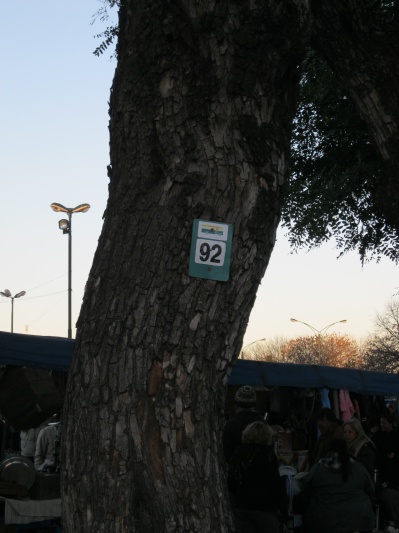 Bus stops can be pretty much anywhere… 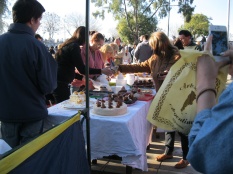 Yummy array of desserts in Mataderos

Ceiling at the Ateneo

View at the side of Ateneo

View from the top floor of Ateneo
On Monday, a group of us finally went to Cafe Tortoni to see a tango show. (We’d only been trying for a week!) We got a great view of the Congreso building while heading to buy tickets. Before the show we went to a parrilla in San Telmo. It was pricey but tasty. Unfortunately, dinner took a little longer than expected (oh so common with a group of people) and apparently my Spanish was not up to par, so we missed part of the show. (I could have sworn they said doors opened at 10, show at 10:30.) Oh well, everyone had fun at least, and what we saw of the show was fantastic.

A view of the side of the Congreso