Having checked the home page of the Mendoza Sun to make sure the Los Libertadores pass was open, I set off from Mendoza to Santiago by bus. You’ll see a lot of forums and websites and guide books recommend this trip – and you know what? It’s not overhyped. It’s a beautiful journey, even if you are at the mercy of the weather during the winter. In fact, I got a bit snap-happy, so I’ll divide the pictures up a bit for easier viewing!

The bus started out by arriving late, but I was not too worried as I saw a long line of people waiting, including at least three other backpackers. (That’s the most backpackers I’ve seen together actually, so far in my South America travels.) I took Andesmar (same as from Buenos Aires) and was again quite impressed, even with only semi-cama seats. Andesmar actually served snack food on this trip, something I’ve since found out not all companies do.

I was in the very front, across from where the driver would be, but on the upper level – the panoramic seats! Sadly, there was a fine mesh screen at the front of the bus meant either to protect us from the sun or host an ad, so the panorama was a bit blocked, but it wasn’t too bad. And I often had to clear the condensation from the window as well.

We headed out west into the foothills of the Andes. I’m not sure whether this set of hills is a separate range or not. While they are not very high, they are pretty, and every so often we’d come around a corner and catch a glimpse of snow-capped mountains framed by these hills. 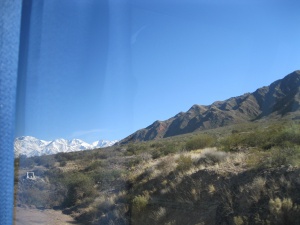 A glimpse of the Andes

Gradually, we climbed, going around curves, ever higher, until we reached our first snow. And from then on, there was a lot of snow. So much so, in fact, that there is actually a ski lift just past the border into Chile.

Not too long before we got to the Christo Redentor tunnel, we saw this incredible vista of mountains surrounding a valley. A sign stated it was Aconcagua National Park, and I think I saw Aconcagua itself, though it’s hard to be sure I got the right peak! Aconcagua is the highest mountain outside of Asia. 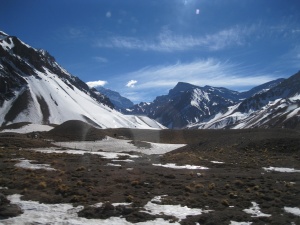 We seemed to be more or less on time when we came to a tunnel marking the border. A lengthy tunnel, that, going through a mountain! And then we started seeing these long lines of trucks that looked like they went for miles (literally, since this pass is one of the primary land routes in or out of Chile). Our driver would peek out to see whether there was oncoming traffic and then bypass these semis, in a narrow, curving two lane road with nowhere to pull off. It was a bit harrowing!

We finally pulled up to the border and sat for a couple of hours. The sun was beating down and I couldn’t tell I I were feeling uncomfortable because of the altitude (I think we were up about 5000 feet or more above sea-level) or the long bus ride. It’s probably just the latter. 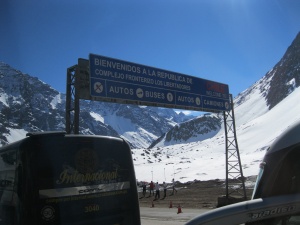 After two hours, we were all told to pile off and go into the warehouse-like border and customs building, where we waited in line to get our exit stamp, then another line for our entry stamp, then a third line for our hand luggage to be inspected. Periodically dogs would come through to make sure that nobody was smuggling fruit or anything else that could introduce invasive species into Chile, which is essentially a land-locked island ecologically. That all took another hour. Apparently the dogs are also trained to be drug sniffing dogs because some idiot in the back of the bus tried to smuggle in some pot. It’s not like it isn’t well-advertised that they have dogs at this border crossing – how stupid do you have to be to try something like that?!

Three hours delayed, we set off on the part of the journey that garners the most photos: the around 30 switchbacks needed to get from the pass to the rest of the road through the Andes. This was where my seat choice was fantastic, exhilarating, and, at times, terrifying. But our driver was very cautious and we made it down unscathed. 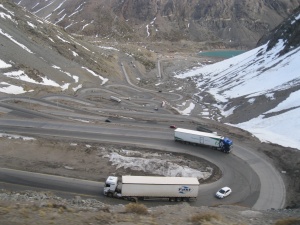 Traffic on the around 30 switchbacks in the Chilean Andes

We passed through more snowy splendor until we finally left the Andes. Chile is much greener than the Argentine Andean foothills, as is the case the world over where a mountain range blocks incoming clouds. I saw a lot of cacti, some vineyards, and just what seemed like an astonishing amount of green. 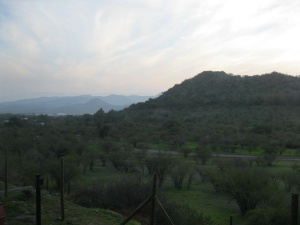 The green of the Chilean side

Being so late on a Friday (yes, I’m quite aware I’m ten days behind in blogging, thanks), we of course hit traffic in Santiago, further delaying us. Eventually we emerged from the bus into the chaos of the bus station, where I found an ATM and then set off towards the metro. My first impression of Chileans was of how nice they are (an impression that didn’t change in my time there) – when I asked a young woman how to get to the metro, she walked me there, making sure to wait when we got separated by the heavy foot traffic, pointed out where to buy a ticket and what side of the station was the direction I needed!

Buying a ticket was a shock after Argentina, where they never have change for large (or sometimes even small) bills. Since I’d just been to an ATM, I had to essentially use something worth $20 for a $1 ride. I apologized profusely but they honestly didn’t even blink. The subway is fantastic. Physically, the trains remind me of some of the modern metro cars in Paris, and the frequency of the schedule is really impressive. It’s a huge contrast to Buenos Aires. Much though I love BA and its atmosphere, I’m not a fan of the Subte.

My hostel (Hostel Nomades) was great, chilly but with blankets and huge, fluffy down comforters to let me have a good night’s sleep at the end of my journey.

A gallery of my land crossing:

2 comments on “Through the Andes!”