OK, I’m back! I’ve gone to Chile, returned to Buenos Aires, bussed to Cordoba, returned once more to BA, and then flown back to the States, where I’ve been busy relaxing, preparing for my Southeast Asia trip, and…not catching up on my blog. Oops! But I figure you don’t want excuses now, you want to see my pictures or read my oh-so-charming words. Right? Right! So here goes…

I arrived in Santiago rather later than expected, given the slow transit time through Customs and the hideous traffic that we ran into in Santiago itself. Santiago has three or four bus stations, all located relatively close together, so there were all of the other inter-city buses to contend with. And then there was the Friday night traffic in general.

I got off, a little overwhelmed by the lights and the crowds, and found my way to an ATM as I had absolutely no Chilean pesos whatsoever. I was a little nervous being in a big, unknown city after dark, but I quickly felt very comfortable in Santiago, and safer than in many an other city. (That’s not to say that there aren’t pick-pockets or bad areas, but honestly, Santiago is known for being one of the safest cities in South America.) I also quickly found out how very nice and welcoming Chileans are, as when I asked a young woman where the metro was, she walked me to the station, showed me where to buy a ticket, and told me in which direction to go.

Accustomed to the dearth of small bills in Argentina, I very apologetically offered my fresh-from-the-ATM 10,000 peso bill (about US$20) for my 600 peso ticket. The lady in the ticket booth didn’t even blink, just gave me my change and my ticket and sent me on my way!

The next surprise was the subway. Trains come only a few minutes apart, and are spotlessly clean and modern, comparable to (or better than!) many a Northern hemisphere subway system.

My hostel (called Nomades Hostel) was in the Bellavista neighborhood, once known as being the bohemian area of town. After all, it’s where Neruda had one of his three houses. It didn’t seem too artsy nowadays, but it was a pleasant area in which to stay, with a couple of streets full of restaurants (the street of nice restaurants versus the bar-filled street). My hostel had apparently given up on my arriving, since I was pretty late, but I managed to check in without trouble. They even moved me to one of their empty dorm rooms, so for most of my stay, I essentially had a private room for the price of a dorm bed!

My first day, I decided on a free walking tour since it’s a great way to learn about a city. To kill time until the tour, I set out to Plaza de Armas, the historic city center and where the tour was to start. It’s a perpetually busy square that’s predominantly pedestrian – the first time I saw it, there was some kind of festival going on that celebrated Bolivian dancers and bands. I popped into the Cathedral but had to leave fairly quickly – while mass wasn’t going on, some religious broadcast by Radio Maria started while I was there and I didn’t want to disturb anyone.

I checked out the inside of the central post office, and went to the National History Museum (which had some amazingly preserved old clothes) which is located in an old governmental building. 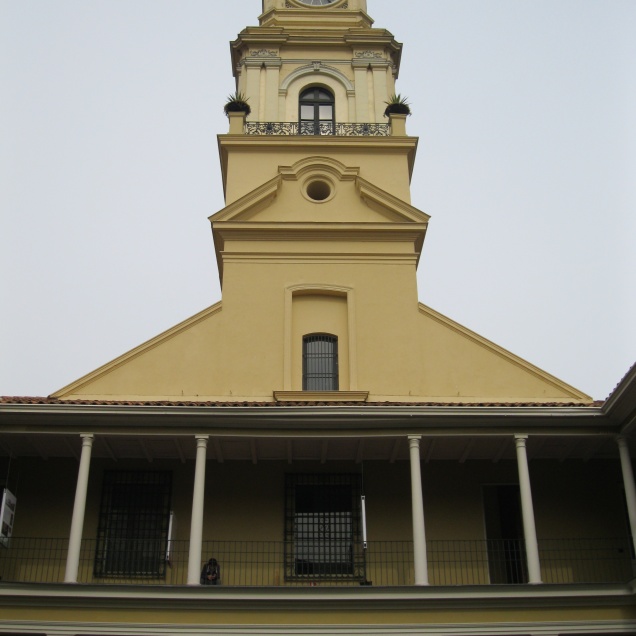 Another view of the Cabildo

Outside view of the old Cabildo, Plaza des Armas

I had time to head out for lunch, so I went to the Central Market to get some of Santiago’s vaunted seafood. I had heard that the restaurants around the outer wall of the market were much cheaper and less touristy, so I attempted to find one of them, but ended up accidentally in one of the most expensive. Oh well! I found my meal of chupe de mariscos – a type of seafood stew – tasty, if not cheap. 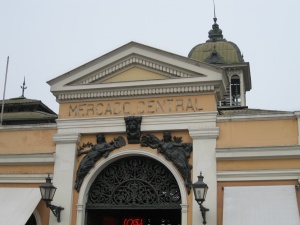 Interior of the Mercado Central

I hurried back to Plaza de Armas after lunch, and headed out on my walking tour, which was really enjoyable. Not only did we walk through several different, charming historic barrios (Santiago is extremely walkable, another point that made me absolutely love my stay), but we got very dramatic explanations of the various sights. (Apparently our guide’s other job is as an actor.) Unfortunately, there is a lot of construction going on right now, so we weren’t able to see the presidential palace of La Moneda, and we learned that the most-vaunted museum in the city (the Pre-Colombian Museum) was still closed for renovations. 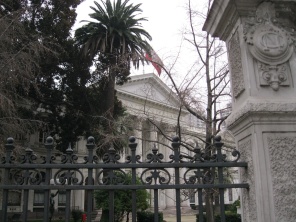 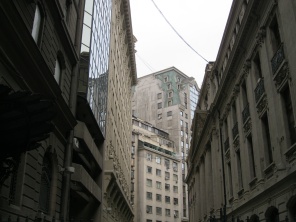 Formerly owned by a Frenchman I believe…

Near or in barrio Paris Londres, charming narrow streets 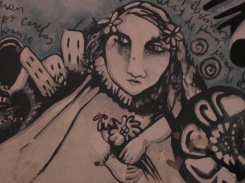 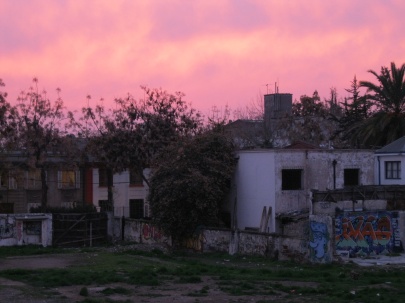 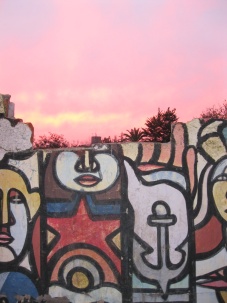 On the tour, I met another young woman named Samantha. We hit it off and went for drinks with some others from our tour group and then hung out and had dinner at one of the slightly pricier seafood restaurants. I am now in love with grouper – it’s a delicious fish! And I had a great time with great people, a good omen for the rest of my South American travels!