I was super excited to be taking a dyeing and weaving class at Ock Pop Tok (translated as East Meets West). I was taking a one day class, in which I’d learn about natural dyes and weave a silk placemat. Georgina was taking a two day class, so she ended up making a silk scarf.

We headed over to Ock Pop Tok’s handicraft center, where we were greeted with some cups of tea and a beautiful riverside view. It turned out that we were the only people taking classes that day.

First came the dyeing. We heard about the silk production and dyeing processes. I was surprised to see what bright, vibrant colors can be obtained from natural dyes. And it was fun to see chemistry at work – part of the difference between an orange and a red dye, for example, was a rusty nail.

We then walked through the weavers’ section. We learned how the pattern is set up on strings that are set up at the back of the loom. Pulling up a string raises specific threads to run the loom shuttle under, thus creating a pattern. I still don’t understand how they can see the pattern in these threads because they have to know which thread to move up or down at what time. Later on, we found out that each loom may have threads for two different patterns strung on it. Master weavers definitely deserve the title. That walkthrough wasn’t intimidating at all!

Full of trepidation, we started off choosing what colors we wanted to dye our skeins of silk. I chose gold, orange and blue. Then we walked over to the master dyer’s work area. We chopped wood, peeled berries, and threw things into pots to simmer. The indigo had already been prepped, so we started dyeing our skeins. For the indigo, this meant squeezing the skein in the dye so the dye would get worked in deeply. Then rinse the skein off, shake it out, and “snap” it so the fibers lie straight and it can be hung up to dry.

A dyer prepping a skein for the ikat technique (tie-dye) 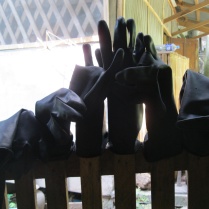 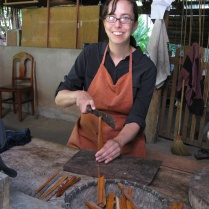 Prepping wood for the dye 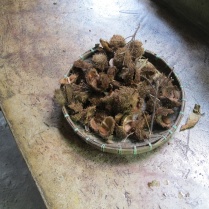 Shells of seeds for dye

Undyed skeins
While we were dyeing (and later while we were weaving), some groups came by to tour. Apparently we were one of the attractions! It was a slightly bizarre feeling, but good to know how all those weavers felt when we went through!

We took a break for lunch, and then headed over to the looms that had been set up for us. Each of us had a master weaver to work with, and a translator helped us out as well. I can’t help but feel how boring it must be for them! The translator said it depended on the weaver. An older master weaver liked teaching more, as her eyesight was getting bad for weaving.

“My” master weaver setting up the loom

First we got to spool our skeins of silk. Sadly, we weren’t able to use the skeins we had just dyed. I’m not sure why – perhaps they were still drying. Then we learned how to weave solid color, which was fairly straightforward (though I admit that every time I thought that, my attention wandered and then I came close to messing up!) Next came the pattern. The master weavers did most of the work, since they chose which thread to pull up or down to create the pattern. Nonetheless, I felt a great sense of accomplishment when my piece came off the loom!

2 comments on “Weaving and Dyeing”