I spent my final day in Istanbul (yes, over ten days ago now – how time flies when you’re flying hither and yon!) trying to see the things I’d not yet had a chance to see, but definitely wanted to see before I headed back to the States. This included the Basilica Cisterns, the Grand Bazaar, and the Great Palace Mosaics, along with some quiet time to just enjoy a view of the Bosphorus and write postcards. (I’ve been sending a lot of postcards!)

First, the Basilica Cisterns. They are…incredible, would be the word for it. Or atmospheric. Apparently there was a scene filmed here for “From Russia with Love”, one of the Sean Connery James Bond films, when there was a higher water level. Higher water level, you ask? Well, the Cisterns used to contain some of the fresh water supply for the Byzantine city in Justinian’s time (6th century?). Late in the 20th century, the city removed much of the water and put in a walkway for tourists. They even have concerts down there, which must be a unique experience, though I can’t imagine the damp would be any good for the instruments. It really doesn’t take that long to go though the Cisterns: they take up maybe a full city block (which is pretty large if you think about how old they are, but doesn’t take too long to walk through). Your first impression is of a big, echoing cave filled with columns which are lit from below. You approach the railing to look at the water and see koi. Walking on the walkway, you proceed to some corners where there are fewer tourists. Water drips from the ceiling and you can easily imagine a scene from a suspense novel or spy movie taking place here. For me, it became a little eerie as I imagined what it would be like to be trapped here overnight. (I have an active imagination, what can I say?)

Anyway, you can judge for yourselves: 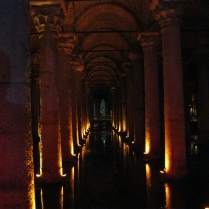 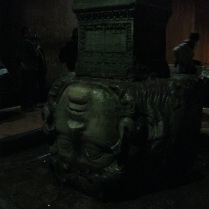 The Guardian of the Cisterns

Dark Corner of the Cisterns

I also screwed my courage to the sticking point and headed to the Grand Bazaar. (Think there are a lot of people at the entrance? Inside was even worse!)

Entrance to the Grand Bazaar

Now, let me be clear. I do enjoy shopping. However, I don’t enjoy large, jostling crowds with lots of picketpockets, and I certainly don’t enjoy the kind of salesmanship I’ve endured from carpet salesmen in Turkey. Leave me alone to do my shopping and I’ll be much more likely to make a purchase. So you can understand that I felt some hesitation in going to the Grand Bazaar. All of that said, I am definitely glad that I went. The sprawling building itself is pretty incredible, and when you step off into the side areas (hans) within it, you can ignore the modern soccer jerseys and imagine yourself back in the days of caravans and the Spice Road. It’s also pretty iconic.

Well, these two sights were the last ones that I felt I’d be upset if I missed, so I decided to have a leisurely afternoon and find the cafe under the walls of Topkapi with a great view of the Bosphorus that the Guesthouse owner had recommended. I entered the Gulhane park and walked to the far end, then took a turn to the right up a fairly steep hill to the outside of the Palace. There I found the cafe, as promised, and the lovely older English couple with whom I’d chatted over breakfast the past two days at the Guesthouse. They invited me to join them and we had a great chat over tea and a magnificent view of the Bosphorus. We decided to have dinner together that night, since it was my last night in Istanbul. When they went off to explore the city some more, I stayed and wrote postcards until my pen ran out of ink.

Without a pen to write with, I thought I should take a look at the Great Palace Mosaic Museum before I left. It’s a small museum, the only exhibit being this impressive huge mosaic (and pieces thereof) that they discovered behind/under the Blue Mosque. It’s Byzantine, from a bit before the Basilica Cisterns, and reminds me a lot of ancient Roman mosaics I’ve seen. Part depicts hunting scenes while the other end shows more activities of daily life.

Then it was back to pack, and then out for dinner at a lovely restaurant specializing in Ottoman cuisine. I had lamb – I almost always have lamb when it’s a choice, because I love it and very rarely make it at home. The British couple I was with had really taken me under their wing (I think I’m a year younger than their youngest daughter), and I had a very pleasant meal and walk with them. As the finishing touch to the evening, they showed me the “special tunnel exit” from the restaurant. It turns out that the block of buildings that the restaurant and our hotel are part of is built on the ruins of an old Byzantine palace. The restaurant had discovered the site when trying to expand the basement. (Apparently it featured on the History Channel’s Cities of the Underworld show on Istanbul.) We got to walk through dark rooms vaulted in a Romanesque style similar to what I had seen earlier in the Cisterns, emerging by another restaurant. Can you imagine digging out your cellar and discovering ruins over 1500 years old?!