On the last day of September, I hopped on the Green line bus to Chiang Kong, wending my way through northern Thailand. We went up and down lush hills, continually heading onto higher ground. I saw a lot of what looked like marijuana growing in fields by the side of the road, but I’m guessing it was a different plant as the Thais have fairly aggressively worked with the northern farmers to eliminate drug farms. Even if those farmers are growing the drug, I doubt that they would do so right by a national road!

The trip was bumpy, but not quite as nausea-inducing as the trip to Chiang Mai. They served us water and cookies, and even showed a movie (what I think was one of the Fast and the Furious franchise, dubbed into Thai. That was confusing, I mean, interesting).

I had read enough blogs to know what to expect when we reached Chiang Kong, namely no bus station and a horde of tuk tuks waiting to take us to Immigration. As the price stated was less than what other bloggers had paid, I was happy to hop on a tuk tuk and we puttered over the few kilometers to Thai Immigration. There was a sign nearby saying “information” and “visa help” but I decided to bypass it (with some trepidation) and go straight to Immigration hoping I wasn’t missing any steps. Exiting Thailand was a breeze, and I went downhill to the boats to cross the Mekong into Laos. 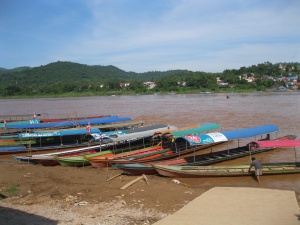 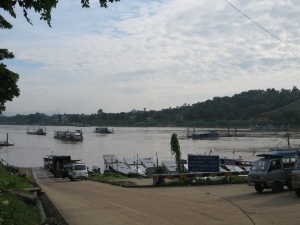 First view of the Mekong

I hadn’t thought about the logistics of getting onto a small boat with a backpack, purse, and tote bag, so that was an interesting experience! I managed not to capsize my boat, however, and only had to wait a minute or two for the boat to leave. The trip across the Mekong was lovely, despite the brownish waters of the river, and over quite quickly. I managed to lever my backpack and me up off the seat and stepped onto Lao soil!

The Lao visa on arrival line wasn’t long, though it took them a little while to paste the visa in. I ran into two of the guys with whom I’d travelled from Phitsanulok to Sukhothai – the joys of traveling a common backpacker route!

Then up the street and to the left, to check the rooms at the B.A.P. Guesthouse. They looked ok, so I took a room despite it being the first guesthouse I looked at. And I saw several people head out to comparison shop and then end up back at B.A.P., so that was a good sign. I also decided to get my slow boat ticket via the guesthouse, after walking down to the quay, as they arrange for the tuk tuk down. The lack of hassle was worth the mark-up.

Then my first beer Lao with dinner (because it’s Laos, of course) and off to bed in good time. 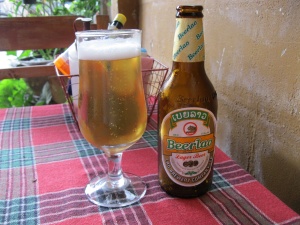 The next morning, I hopped on the tuk tuk with a couple of guys also heading to the slow boat. We arrived perhaps an hour early, but since there isn’t really anything to do on the pier, I decided to board early. Luckily, I was pretty much the first person on, since it meant I got my assigned seat and nobody but the crew was there to witness my difficulties in boarding the boat over the narrow plank. (Big backpack, bad balance, enough said.) The bag went into a hole where they had lifted up one of the deck planks, so everyone boarding had to shimmy around the edge. 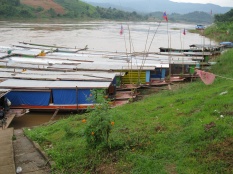 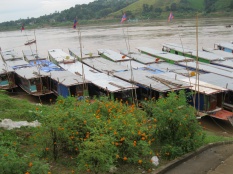 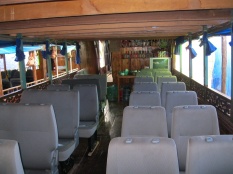 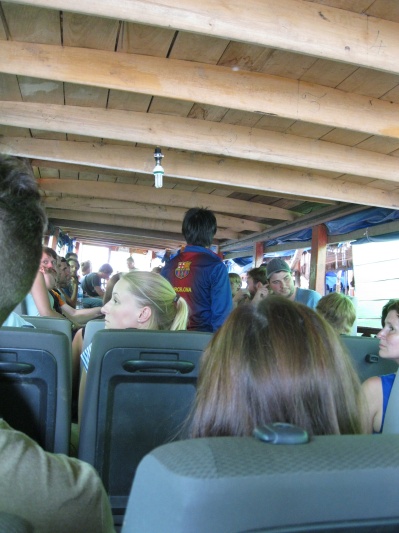 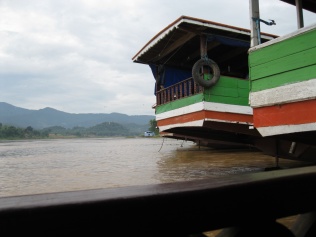 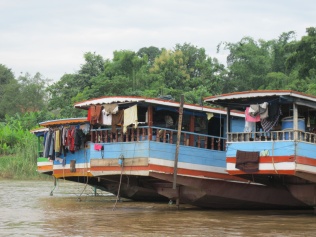 Gradually the boat began to fill up and I thought to myself that it wouldn’t be too crowded. Then right when we were scheduled to leave, I saw feet hurrying down the hill (the rest of the person being blocked by the boat’s roof). Then suddenly it was like someone played a parlor trick and the line of feet waiting to board was never-ending. Person after person boarded the boat, well past what I thought we had capacity for. Finally we left, with people crammed into every seat and probably in the back as well.

The trip down the Mekong takes two days. Most of the time is spent looking at scenery, reading, or talking to your neighbors. I was pretty happy just looking at scenery for most of the first day. Most of it was beautiful, tree-lined hills in between the rare village probably only accessible by river, although I did see a dead pig float by and there were yellowish sponge-like things that someone said were soap suds. Pristine water it is not. 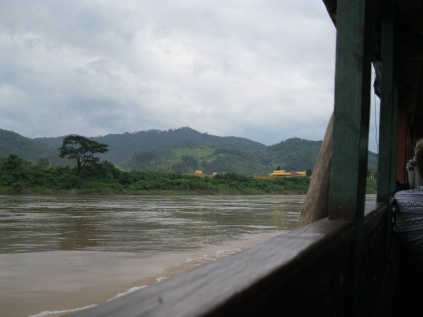 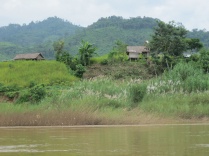 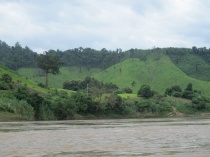 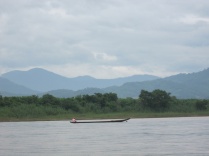 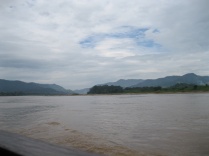 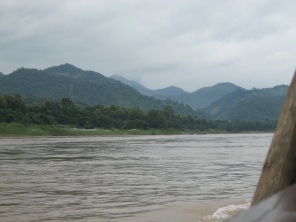 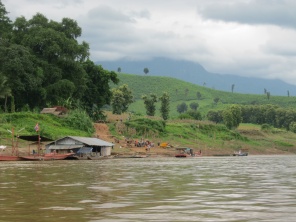 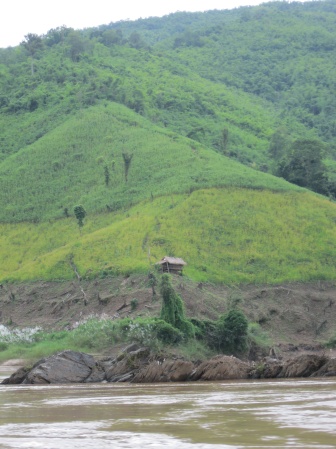 Towards the end of our first day of travel, it started to rain. The wind blew some rain in under the roof so the crew lowered tarps along one side. My side remained unshuttered, letting me see spectacular misty views.

If I had thought boarding was hard, getting off was worse, with the plank off the ship being half the width and tilted at a steep angle. But once again I managed not to fall in, so anticipation was no doubt worse than execution.

I bypassed the guesthouse touts and headed to a guesthouse reviewed by Lonely Planet. When I agreed to take a room, I was asked whether I’d be willing to share with a Chinese woman about my age. Turns out that she was traveling with her brother and sister, and I guess the guesthouse only had two twin bed rooms (though I didn’t see anyone else there). I was taken aback since I’d expected my own room, but agreed since she was part of a family party and seemed nice enough. And you can’t beat the price of five dollars per person for the room! I actually ended up having dinner with her and her siblings, which was nice.

Laos has a curfew, so we all headed to bed early in preparation for the next day. 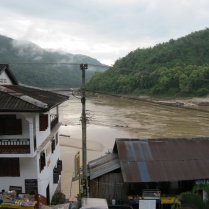 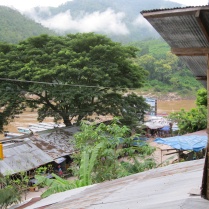 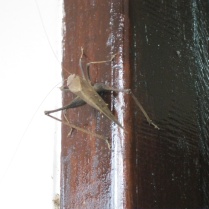 The next day was more of the same, though people boarded earlier since they knew how crowded the boat was. It was a different boat with less leg room and that rode lower in the water, so that we tilted perilously close to the water anytime the captain zigzagged. Zigzagging is necessary to avoid the submerged rocks and mini-whirlpools that are scattered throughout the Mekong.

Shortly before we arrived in Luang Prabang, we passed Pak Ou caves on one side (caves where bunches of Buddhas were collected) and this huge, dramatic karst formation on the other side, where another river joined the Mekong. 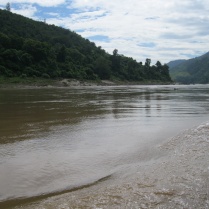 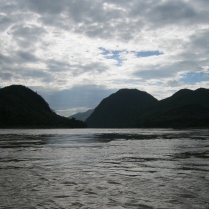 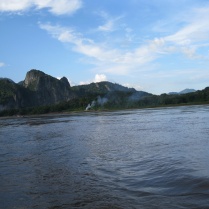 Finally we stopped at a wooded bank with stairs which started halfway up the hill. Some people started getting off (tourists, as opposed to the locals who had already gotten off at various stops – riverbanks or sandbars – to get to their villages along the way). The rest of us were confused by the absolute lack of a place to get off the boat, but finally realized that the scramble up the hill to the stairs was the way to get to tuk tuks that would take us to Luang Prabang. My tuk tuk driver didn’t know where my guesthouse was, but managed to drop me within a few blocks. I wandered around a few narrow, unlit streets before managing to find the guesthouse that would become a home away from home, Manichan Guesthouse.